The Age of Mining

Striking Gold
As early as 1865 prospectors began coming into the Rainy River and Rainy Lake area on both the Canadian and American sides, to search for precious minerals. George W. Davis, a prospector, arrived at the Little American Island in Rainy Lake in July of 1893. He panned some quartz and found gold. News of his discovery spread quickly and soon hundreds of prospectors were streaming into the region. Mining operations by the Bevier Mining and Milling Company were in full swing on the Little American Island by 1894. Mines were also opened on the Dry Weed and Bushy Head Islands.

On May 17, 1894, Rainy Lake City, which was located at the entrance to Black Bay, was incorporated by the Rainy Lake Improvement Company of Duluth, Minnesota. By the fall of 1894 the village had a population of about 400 persons who lived in tents, covered wagons, log houses and tar-paper shacks. The bustling little village had 3 general stores, 3 hotels, 2 restaurants, a hardware store, a 5-stamp mill, a barber shop, 5 saloons, a post office, a customs office, a newspaper (The Rainy Lake Journal) and a school. Later a bank was organized. It had the appearance of a typical mining community. At the peak of mining operations, there were about 500 persons residing in the village.
Traveling to Tower
There were 2 routes by which the prospectors arrived. One was by rail from Duluth to Port Arthur, Ontario, and 1 to Rat Portage (now Kenora, Ontario); from there by boat across Lake of the Woods and up the Rainy River to either Fort Frances or Koochiching (now International Falls). After a portage around the falls, travel was resumed by boat to Rainy Lake City a distance of about 12 miles. The other route which was shorter but more hazardous was by rail from Duluth to Tower, by steamboat from Tower to the Vermilion Dam, then a grueling trip over a 26 mile trail of gumbo, corduroy, swamp and rocks to Harding on Crane Lake; from Harding by steamer to Kettle Falls. 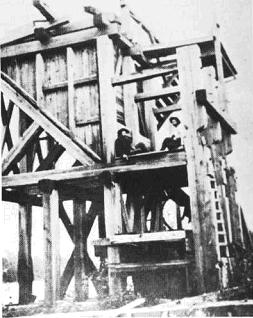 After a short portage around the falls the remainder of the trip to Rainy Lake City was by boat. During the winter months, the trip from Tower was by dog sled. The machinery for operating the mines and for building the sawmill as well as foodstuffs, supplies and materials used by the villagers were brought in over the Tower Route.
Gold Mining
The mine on Dryweed Island was not very productive and was open for only a short time. The one on Bushy Head Island was in production for about 2 years. During the first 4 years that the mine on Little American Island was worked, it produced a considerable amount of gold at a profit. After that, ownership of the mine changed several times. Mining operations ceased in 1901 which also marked the end of Rainy Lake City. Many of its residents moved to the village of Koochiching to make their fortune. 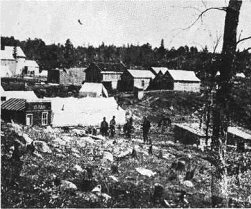 To help stabilize the muddy streets in International Falls, the tailings from the mine on Little American Island were transported to the city. Thus its citizens boasted that their streets were paved with gold.
Property Tax
Information
County
Maps
Agendas
& Minutes
County
Employment
Notify
Me®