Geography of the Land

Previous: Rise of the Fur Trade

Geography of the Land
A history of any area must take into account the physical features of the area — geography, etc. — because these affect the lives and livelihood of the inhabitants.

About 90% of Koochiching County was once covered by former Lake Agassiz, formed when the last of the vast glaciers receded about 10,000 years ago. 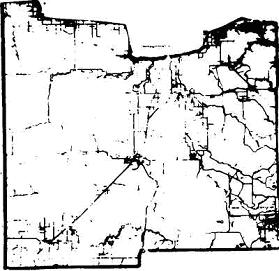 The land surface, therefore, is relatively flat with swampy areas remaining in places where the Agassiz basin was deepest. Deposits of peat ranging in depth from 1.5 to 50 feet developed in the low-lying areas, the result of partial decay of vegetation. An estimated 1 million acres in the northern 3/4 of the county are underlain with peat. Studies for using the deposits as an energy source have been under way for several years.

Ground Makeup
The generally level surface of the land is broken in places by ledges of Precambrian rock, the formations extending from southwest to northeast. Bed rock types include the Ely greenstone and greenstone schists said to be among the oldest on the planet. The highest altitude in the county is in the Northome area — 1426 ft. above sea level or about 325 feet higher than Rainy Lake.

Rivers
Major rivers draining the county are the Big Fork, Little Fork, Rat Root, Black and Rapid. All flow northward to the Rainy River basin, and thence toward Hudson Bay by way of Lake of the Woods and the Winnipeg River. A small area in the southwestern part of the county is drained by the Tamarac River, which flows into the Red River of the North by way of Red Lake and the Red Lake River.

Climate
The county's climate has been described as "versatile" with wide variations in temperature. Heat waves are rare but summertime readings in the upper 90's are on record. Winter readings have reached as low as -50F and over the years have won for International Falls the dubious honor of being "Icebox of the Nation." Annual precipitation is in the range of 22 to 24 inches, most of it occurring as rain between May and September. Snowfall generally measures 48 to 50 inches.

Next: New County is Born