Previous: The Era of E.W. Backus

Hiking & Waterways
Before the railroads and roads were built, the early pioneers who came to the county hiked over Indian trails or whenever possible made use of the lakes and rivers to reach their destination. The most common route was via Kenora, Ontario, and then by boat across Lake of the Woods and up the Rainy River to Koochiching Falls.

A dog team pulled the International Falls-Fort Frances "ferry" when Rainy River was frozen.
Some of the steamboats that made regular trips with passengers, mail and freight are: the Shamrock, Chieftain, Keewatin, Keenora, Rover, Couchiching, Empress and many others. According to old records, 39 boats had been used. 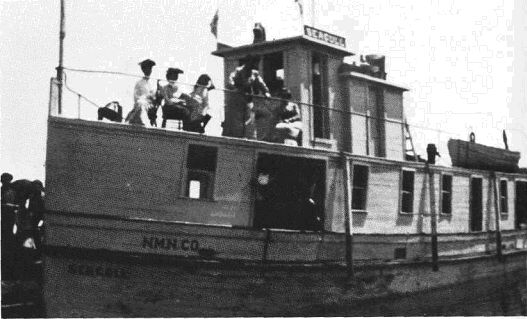 The "Seagull," a hardworking steamboat operated by Joe Lloyd plied Rainy Lake, hauling supplies for miners and homesteaders.
In 1901 a Rainy River steamboat the "Welcome" began to make voyages up the Little Fork River to serve residents along its banks. Later, the "Itasca" and the "Mud Hen", built for the Northern Navigation Company, also made trips to the village of Littlefork. Another vessel, the "Sea Gull" was only used on Rainy Lake. The transportation of passengers and freight by steamboats up the Little Fork ceased when the railroad reached Littlefork in 1907.
Railroads
In 1901 the Canadian Northern Railroad (Canadian National) that was being built from Port Arthur, Ontario (Thunder Bay) to Winnipeg, reached Fort Frances. Thus those persons seeking to make their homes on the American side of Rainy River had another and more convenient means of travel. 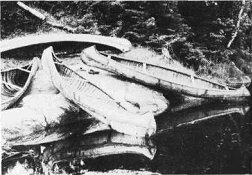 Birchbark canoes made by Indians were first means of travel here.
In 1907, 2 logging railroads, 1 the Minnesota and International (M & I) a subsidiary of the Northern Pacific, with its origin at Brainerd, was completed to International Falls; the other, the Duluth, Rainy Lake and Winnipeg, was completed as far as Ranier. Its name has been changed to the Duluth, Winnipeg and Pacific. 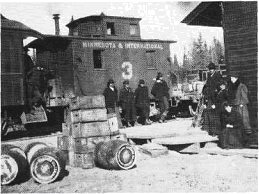 Railway Connections
To give the Backus interests access to both the Duluth, Winnipeg and Pacific and the Minnesota and International railroads the Minnesota, Dakota and Western (M. D. & W.) Railroad laid connecting tracks to both of those lines. The M.D. & W. was extended west from Nakoda on the M & 1 to Loman and was used for shipping timber to the mills in International Falls.

It was said to be Mr. Backus's dream that the MD & W Railway be extended west from Loman to the Dakotas to haul wheat to the flour mills to be erected in International Falls. 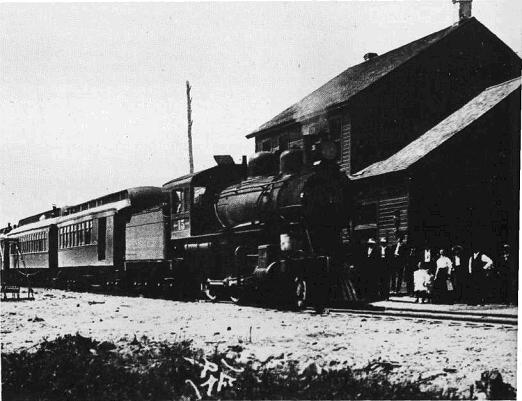 An 8-car passenger train pulls up to International Falls Station (1908).
Roads
When the pioneers arrived there were just trails through the woods. As the population grew, the settlers in the townships began to build roads to the nearby villages and communities. The cost was paid for by the townships. In many cases the men donated their labor. The roads were narrow and practically impassable when it rained. 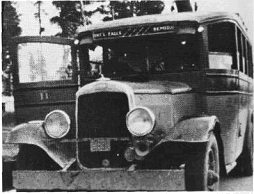 With the passage of the Elwell Road Law, the state began to help the counties finance road construction by paying 1-half the cost providing the highway built met state specifications. The roads were maintained by the county. Under this law roads numbered 5, 9 and 24 were built. Number 5 began at International Falls and went west to the junction and then south to Northome and the Itasca County line. Number 9 began at the border city and south to the St. Louis County line and number 24 began at the Pelland Junction and west along the Rainy River to the Beltrami County line now Lake of the Woods.

The Babcock Amendment to the constitution provided for a state highway department to be administered by a Commissioner of Highways appointed by the governor, designated certain roads as state highways, stipulated that all state highways be constructed and maintained through the State Highway Department, that all motor vehicles be licensed by the state at a fee set by the legislature and only used for highway purposes. The state legislature passed a law providing for tax on all gasoline sold for use in motor vehicles. The state tax on gasoline will be 17 cents per gallon after January 1, 1984. Of the monies now collected from the motor vehicle license fee and the tax on gasoline, 69% goes to the state, 29% to the counties and 9% to cities having a population of over 5,000.