Previous: The Age of Mining

Most of the early camps were constructed of logs and other material cut at the campsites because of the difficulty of moving lumber and other building materials upstream to the remote timber areas. Only a few records exist showing the location of these early camps along the waterways.

Railroad Extension
When the Minnesota and International Railroad was extended north from Bemidji to Northome in 1903 and finally reached International Falls in 1907, the same year that the Duluth, Winnipeg and Pacific reached Ranier after being extended north from Virginia, the railroad logging era began in Koochiching County. The railroads also brought on the days of the large company-operated logging camps. In the Northome, Mizpah, Gemmell and Margie areas, several large companies, including the National Pole Company, T.M. Partridge, American Cedar Company, Page and Hill's Northern Cedar Company, Clark Pole and Tie Company and others started large scale logging operations, mainly for cedar poles, posts and ties which were sleigh-hauled to the M & I Railroad at these locations. They operated many large logging camps but no records exist showing their location and other information.
In the early 1900s as the D.W. & P. Railroad was being extended north from Virginia to Ranier, the Virginia and Rainy Lake Lumber Company extended logging spurs into the east central Koochiching County and many large camps were operated in that area until the late 1920s.

Sawmills
In 1907 when the 2 railroads reached the International Falls area, the E.W. Backus interests had under construction a paper mill which commenced production in 1910 and a sawmill which made its first cut of lumber in 1911.

The operation of these mills required more logs and pulpwood than could be supplied from the forest lands adjacent to Rainy Lake and the rivers flowing into it.

To provide the additional forest products needed, the Backus-owned International Lumber Company commenced construction of a network of logging railroads branching off the M & I Railroad that would penetrate the vast forest areas not adjacent to the Big Fork or Littlefork Rivers or the M & I and D.W. & P. Common Carrier Railroads.

Logging Camps
The Galvin Line branched off the M & I Railway at Browley and the Loman Line at Nakoda, just south of International Falls. The Bear River Line and the Deer River Line branched off the M & I Railway just south of Littlefork. The Deer River Line extended 34 miles straight south to just north of Craigville. Camp 29 was located at Mile Post 32 from which point the Holmstrom Spur extended east 14 miles then approximately 15 miles south into Itasca County near Thistledew Lake. From Camp 29 another branch, the Cut Foot Sioux, extended 22 miles west toward Northome then south another 18 miles into Itasca County near Round Lake. These main line logging railroads totaled more than 150 miles when completed. Many miles of spur tracks branching off these main lines into the camp operating areas were also constructed. These were temporary and removed when logging was completed in the camp area.

How many large logging camps were constructed in Koochiching County by the various logging concerns is not known. The best record is that of the International Lumber Company, which shows a total of 192 camp numbers until operations of camps ceased after the 1936-37 logging season. Approximately 30 of these camps were located in Itasca County and 4 in Beltrami County. (Red Lake Indian Reserve in 1926.) The Company also used the alphabet to designate some camps, but only Camp "B", south of Littlefork is on record.

Camp History
Camp 6 at Loman dates from 1910 and was used until 1937, when it closed down after the last of the logs and pulpwood from the Littlefork Drive of that year had been hoisted from Rainy River and rail hauled to the mills at International Falls.

Camp 29, located at MP 32 of the Deer River Line, dates from 1912; built first as a producing camp, it served later as railroad headquarter camp until the steel was removed from the Deer River Line branch in 1947, ending the logging railroad era in Koochiching County. The Camp 29 buildings continued to be used by a logging contractor in the area until early 1970.

The last season that large Company camps operated was 1936-37 when Camps Numbers 185, 186, and 187, located along the Littlefork River in the Nett Lake Indian Reservation, produced the 13 million feet of logs and 30,000 cords of pulpwood, which made up the last drive on the Littlefork River in 1937.
Camp Construction
Most of the company's railroad era camps were constructed to house around 150 men. The buildings usually included 2 bunk houses, cook camp, blacksmith shop, filer shack, barn and feed storage buildings, office for administrative personnel and a root house for vegetable storage. 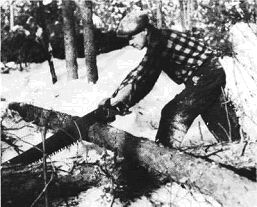 Buildings were of frame construction, with low grade lumber used for sheathing and flooring. The walls and roof boards were covered with tarpaper. The root house was usually built into a side hill and covered with soil. In the late 20s a camp of this size would cost $3,500 to $5,000. This type of housing and boarding facilities was standard for the industry at the time, but the improvements in housing, laundry and bathing facilities that came along in the early 1930s were welcomed by all. 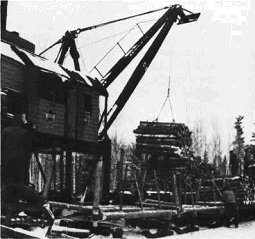 End of Logging Camp Era
The logging camp era in Koochiching County is over and remembered first-hand only by some of our older citizens. In reminiscing they always have praise for the quantity and excellence of the food served. All the companies furnished good quality staple foods and the cooks did their best to provide tasty and nourishing meals. Camp records showed that on the average 6-7 pounds of food per day was consumed by each man. Considering the heavy strenuous work performed in the great outdoors, maybe this total is not unusual. 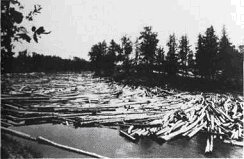 Cedar poles float to market in and early day river drive.
"The men who lived and worked in these logging camp operations made an important contribution to the development and economy of Koochiching County." - Lester E. Pollard